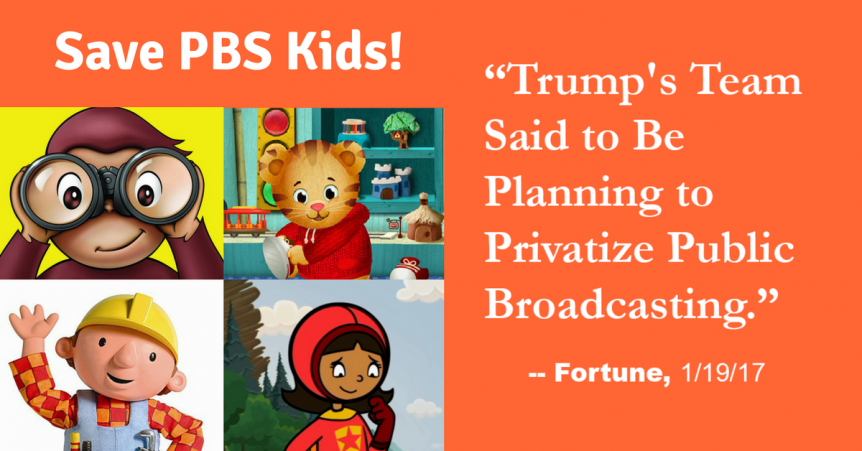 As a parent, I’m thoughtful about my kids’ screen time. But when they do watch, there’s nothing they like more than PBS Kids. Dinosaur Train, Thomas & Friends, Sesame Street, Daniel Tiger’s Neighborhood, Plum Landing – my kids argue fiercely over which one to watch, and love them all.

And I love how much my kids learn — it’s obvious from the conversations we have afterwards. And studies have confirmed that PBS Kids shows increase school readiness, teach emotional and social skills, and help kids learn important concepts.

So they’re highly educational, entertaining, free AND commercial-free. (How awesome is that?)

All of this makes them especially important for low-income and underserved children who don’t attend pre-school.

Which is why I was appalled when The Hill, a widely-respected nonpartisan political newspaper, reported that the Trump transition team is making plans to privatize the Corporation for Public Broadcasting (CPB) – in other words, to end public support for public broadcasting.

Fortunately, the president can’t cut funding on his own. Congress has to go along. So our team at ParentsTogether Action launched a petition so that Congress gets a clear, early message from parents to block the cuts.

The petition has been spreading like lightning. Which is great, because these proposals have been blocked before by a massive public outcry. So please spread the word!

Here’s why it’s so important to save CPB.

CPB is the vehicle through which the public supports PBS, NPR, and the hundreds of local public television and radio stations. Much of this funding flows to PBS, either directly, or as programming fees from the stations.

PBS and local stations have other support from sponsors, grants, and donors, but public funding is a big chunk.  And, as Media Matters points out, “that funding is often contingent on the federal grants CPB provides.”

In a statement, PBS called the proposed cuts “devastating.”

We know that, in many respects, we have a crisis in early childhood education. And that many of us as parents are stretched to the breaking point by trying to do right by our kids while making ends meet.

Seems to me we should be investing in proven supports for the littlest learners, not cutting them. Especially when the total funding for CPB is a miniscule fraction of the federal budget.

Spark meaningful conversations with your kids each day. Sign up for Q4KIDZ.

Are you raising your kids to speak both Spanish and English? Sign up for tips on raising bilingual kids.