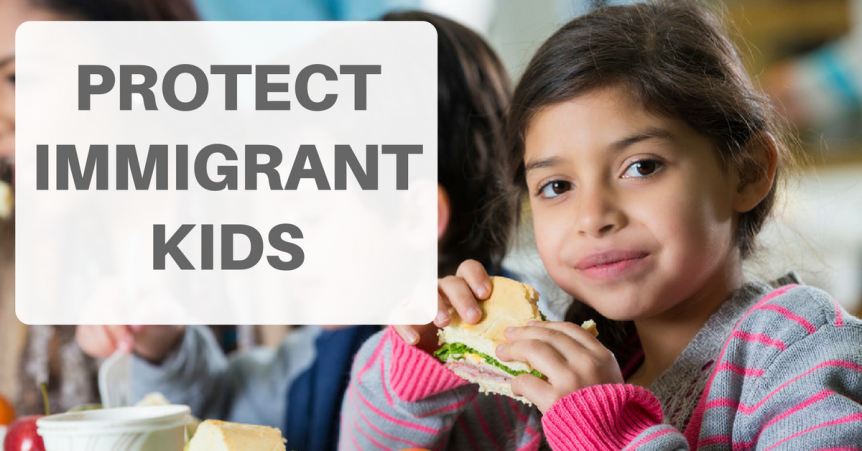 When my parents fled from communist Cuba to the US in the 90s, they depended on food stamps and free school lunch to feed my brother and me. Now as a parent myself, I can’t imagine having to decide between putting food on the table and staying in my home. It’s an impossible choice no parent should have to make.

But that’s exactly the choice that millions of families will face if Donald Trump’s “Lunch Ban” becomes a reality. The draft executive order was first published in Vox in January.

This executive action … would ask the Department of Homeland Security to issue a rule saying that an immigrant can’t be admitted to the US if he’s likely to get any benefit “determined in any way on the basis of income, resources, or financial need.” Furthermore, people who use any of those benefits and are in the US on visas would be subject to deportation.

This means lawfully-residing immigrant families that are relying on food stamps or free and reduced school lunch, as mine did, would be forced to choose between feeding their children, and getting deported. Moms who currently get medicaid will lose access to essential prenatal care, and sick babies will lose health care.

Right now, the Lunch Ban is a draft — which means it can still be stopped. So I wrote a petition to the Administration, and Congress, opposing the draft order.

Even just the threat of the Lunch Ban is leaving immigrant families #ScaredSickAndHungry:

In the two months since President Trump’s inauguration, food banks and hunger advocates around the country have noted a decline in the number of eligible immigrants applying for SNAP [e.g. Food Stamps]— and an uptick in immigrants seeking to withdraw from the program.

Their fear, advocates say, is that participation could draw the eye of Immigration and Customs Enforcement or hurt their chances of attaining citizenship. (Washington Post)

This, of course, is just one piece of a broader Trump agenda to demonize immigrant and refugees families–whether it’s by building a wall, shutting refugees out, supersizing a deportation force, or banning Muslims.

By signing this petition, and encouraging your friends and family to sign, too, you can help push back against the climate of fear the Trump administration has created..

Many of the changes in the Lunch Ban would require lengthy rule-making processes, allowing for public comment–or raise new legal questions. Which means, they can be stopped, if enough of us speak up and bring attention to this latest potential attack on our immigrant friends and neighbors. So please spread the word.

Sign my petition. Share this great video from the National Immigration Law Center (NILC). And encourage friends and family to do the same.

And if you need more info on how you or people you love could be directly affected by the #ScaredSickAndHungry Executive Order, check out this detailed primer from NILC.

Spark meaningful conversations with your kids each day: Q4KIDZ on Messenger | Q4KIDZ via text