Parents had a huge impact on the world last year. As we look forward to all the opportunities 2023 has to offer, it’s also a great time to look back and celebrate all the ways ParentsTogether members made their communities and the world a better place in 2022. We’re all trying to juggle busy family schedules along with a million endless household chores, but it’s so important to take the time to reflect on what we have accomplished together.

Here is a list of 14 ways ParentsTogether members made an impact in 2022!

You fought for pregnant workers and new parents at work.

Our members made calls, talked with legislators, and attended events to fight for much needed policies to protect pregnant and new parents and work. It’s hard to believe but until now, workers could be fired for asking for accommodations like extra breaks for using the bathroom or going to medical appointments, relief from heavy lifting, a chair, a water bottle, and private designated space to pump milk! But together we helped ensure that the Pregnant Workers Fairness Act (PWFA) and the Providing Urgent Maternal Protections (PUMP) PASSED! These critical supports will be huge for the economic security of new parents. In this disturbing era of forced pregnancy and birth, these urgently needed protections for pregnant and postpartum workers can be lifesaving.

You spoke up in Washington, DC to keep kids safe online.

Parents who lost kids to social media dangers asked the President and Dr. Biden to shine a spotlight on the harms to youth caused by social media in the annual State of the Union address. President Biden included a line that said, “We must hold social media platforms accountable for the national experiment they are conducting on our children for profit,” and it came with a commitment to more funding for youth mental health.

And we drove amazing momentum in Washington, DC when virtually all the political insiders thought a federal bill to protect kids from online harms was off the table! We brought 16 parents to our nation’s capital—most of whom lost their children to tech harms—and met with legislators and demanded accountability. Our trip was so amazing that within a day of us all returning home, senators asked us to come back and meet with more members of Congress! Our visit ramped up awareness of the harms, increased the urgency for action, and recruited valuable allies to the fight to keep kids safe online. The tidal wave of demands for Big Tech accountability to Capitol Hill and the relationships we built are ongoing. We will keep working with these moms to seek protections for all kids! 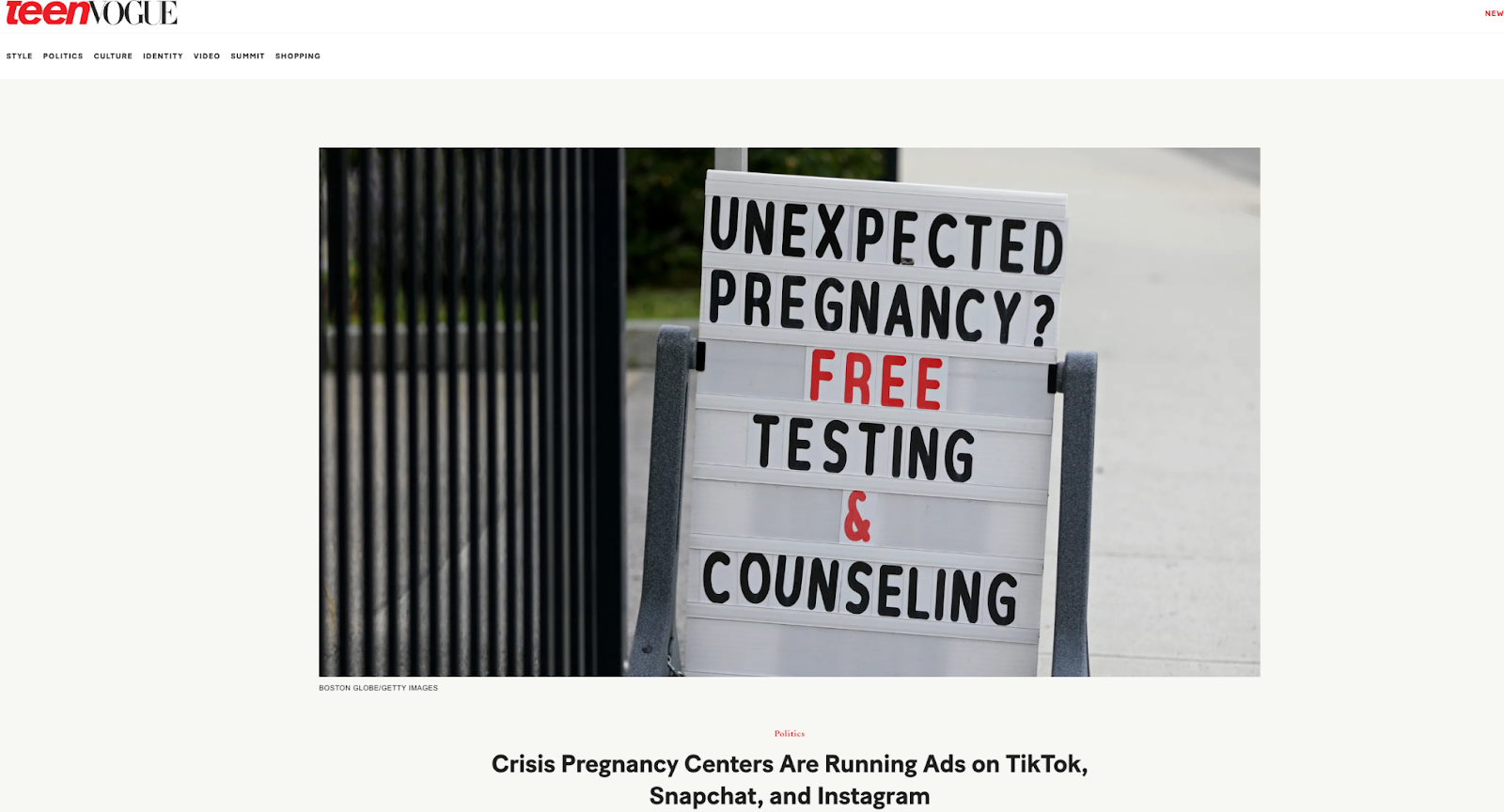 You made parents’ voices heard in the media.

ParentsTogether and our members shared our stories with the media to help push for policies to help families—and were featured prominently all year long! Some highlights include an LA Times en Español oped: OPINIÓN: Las redes sociales y sus efectos nocivos en la salud mental de los más jóvenes (Translation: Social Networks and their harmful effects on the mental health of the youngest), What’s next for the school meal program that’s feeding millions of American children via Yahoo!, a collaboration with Nakia Stephens of MoveOn and Amanda Kloer from ParentsTogether entitled Crisis Pregnancy Centers Are Running Ads on TikTok, Snapchat, and Instagram in TeenVogue, and As Rhetoric Heats Up, Many Parents Fear Politicians Are Using Children As ‘Political Pawns’ in EducationWeek. These stories helped to educate millions of readers and increase pressure on decision makers to fight for equitable, long-lasting policies to help families.

In early December we released our first ever Dangerous Tech Toys Report ahead of the holiday gift buying season. It spotlights potential harms in popular children’s tech toys, including privacy concerns, exposure to inappropriate content and predators, and access to social media platforms. It was covered across tech media, including in Gizmodo with the headline Santa’s Seven Favorite Surveillance Toys of 2022.

You got the vote out.

As part of our proven friend-to-friend get-out-the-vote program, our community sent out voting reminders seen by over 15 million people (your family and friends!).

We launched a targeted strategy to get the California Age Appropriate Design Code passed, including corporate campaigning, lobbying legislators directly in Sacramento, placing op-eds across the state, launching petitions, spearheading parent call-ins, and driving a media narrative about the harms Big Tech is doing to kids. Along with the on the ground organizing, ParentsTogether members sent thousands of messages to elected officials—and the bill passed!

You stood up for LGBTQ kids.

ParentsTogether members took action more than 150,000 times for trans and other LGBTQ youth, speaking out against Florida’s Don’t Say Gay Bill, anti-trans-kids policies in Texas, and Ohio’s bill that would have banned trans kids from playing sports. Research shows that LGBTQ kids need adults to see them and stand up for them, and that’s what you did.

You protected kids from abuse on Twitter and Snapchat

More than 14,000 ParentsTogether members signed our petition asking Twitter to address the child sexual abuse material (CSAM) that was staying on its platform for months. After a series of negotiations, Twitter added its first ever in-app CSAM reporting feature, making it easier to remove abusive imagery quickly.

We also discovered Snapchat’s Quick Add tool was recommending children be friends with adult strangers – giving predators, drug dealers, and other bad actors access to kids.  We met with them and asked them to address the product flaw. As a result, Snap changed their product so strangers aren’t recommended to kids, and kids can only friend adults they know.

You spoke out for veterans and their families.

ParentsTogether member Susan Zeier recorded a heartfelt video outside the Capitol just after the Senate passed the Sergeant First Class Heath Robinson Honoring Our Promise to Address Comprehensive Toxics (PACT) Act of 2022. The bill, named after her son-in-law, provides a sigh of relief for veterans and their families who are finally being given what they deserve for the harm suffered by exposure to burn pits while in the military. More than 18,000 ParentsTogether members signed the petition started by Jon Stewart and John Feal.

You spoke up for economic equality.

You made your voice heard for equity in education.

Hundreds of thousands of ParentsTogether members signed petitions against book bans across the country—including those in Tennessee and Texas.

We are so grateful for all you are doing as part of the ParentsTogether community. Every video shared, phone call made, petition signed, event attended, and vote cast really makes a difference in the lives of so many families.