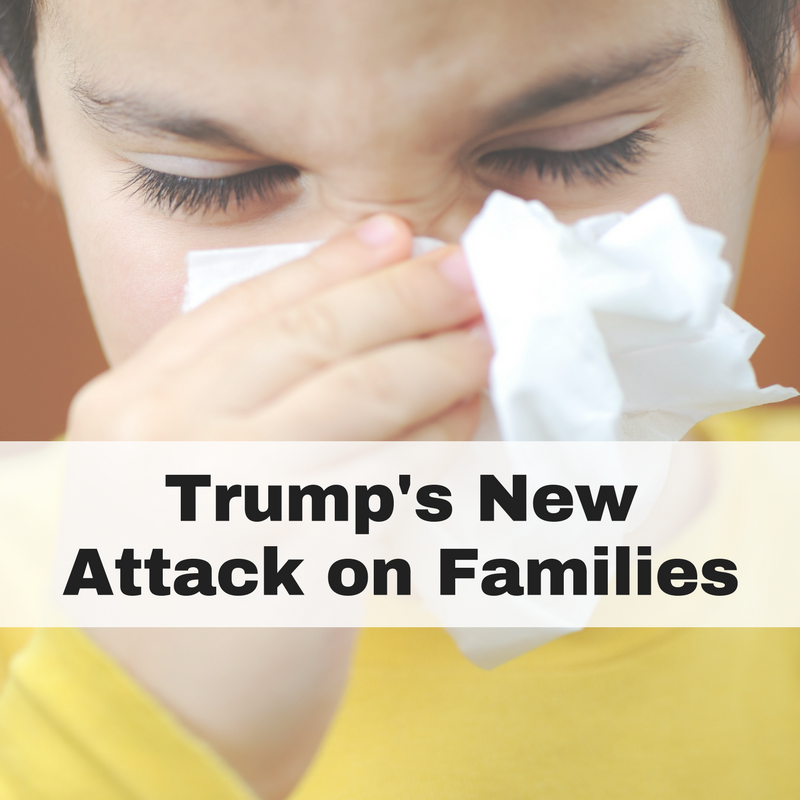 When we think of our job as parents, there are some basic things at the top of all of our lists: Feeding our kids decent meals, making sure we can take them to the doctor when they are sick, and knowing that whether they are in preschool or high school, they spend their days learning and growing.

At ParentsTogether, that’s our vision for what we want for all families. Unfortunately, it’s a vision in stark contrast to the budget released this week by President Trump. The President’s proposal centers on huge tax cuts for the richest Americans, paid for by cuts to programs millions of families and kids rely on to survive.

Here’s what the proposal means for families.

More than 1 in 5 households with kids in our country are food insecure — and programs like the Supplemental Nutrition Assistance Program (SNAP), often called food stamps, help parents make sure they can put food on the table. Amazingly, 60% of the families receiving SNAP have at least one working parent — and they still need help.

The President’s proposal includes a 29% cut to the Supplemental Nutrition Assistance Program (SNAP), which served more than 21 million households in 2016. If these cuts are implemented, 8 million families per year would eventually lose benefits they rely on to keep their kids fed. Putting Healthcare Out of Reach

Kids without health insurance miss out on the care they need; right now, 2 out of every 5 kids in this country get their healthcare through Medicaid. But the President’s budget proposes radically restructuring the Medicaid program, which would lead to massive cuts in federal funding.

The Republican healthcare plan recently passed by the House is already estimated to lead to 24 million people losing their healthcare; through the President’s proposed Medicaid cuts, tens of millions more may face the same fate. That’s a lot more sick kids. The budget proposes slashing almost 1/7 of the U.S. Department of Education’s budget – a decrease of $9.2 billion overall. This would mean larger classes, less enforcement of civil rights protections for students, and cuts to programs that help low-income students thrive.

College accessibility is one of the biggest victims of the budget – the President proposes eliminating subsidized student loans for new borrowers starting in 2018. That would mean students and their parents would have to take on $39 billion (with a ‘B’!) in new costs over ten years.

As Parents, We Have a Different Vision

When we decide where to spend our family’s money, it’s a moral choice. We prioritize keeping a roof over our heads, giving our kids opportunities, maybe even setting something aside for their future or for our community.

The President’s budget fails this moral test. In addition to the impacts listed above, his budget also proposes huge cuts to federal environmental programs, lifesaving medical research, and critical support for women’s health and family planning.

Congress will take the next steps in formulating a budget bill. How closely they follow the President’s blueprint will depend on how much of an outcry they hear about this proposal.

It’s critical that families–especially parents–raise their voices and share an alternate view of what it means to invest in our country, our kids, and our future.